Our first day in Iceland was full of wandering the colorful streets of Reykjavik in the unexpected sunshine.  I enjoyed the small quirks we found in each neighborhood, littered with pedestrians and cafes, restaurants and bars everywhere you turn.  For a city of this small size, Mom and I were surprised by our number of options for which to eat and drink.  Happy hour is a popular time for everyone to go out especially since the price of alcohol is so high, which suited us well because with a 5am flight arrival and a full day in the morning, we were happy for an early night.

Gylfi with Mountain Taxi (don’t ask me how to pronounce his name) picked us up in a massive Ford 4WD for a day trip into the Central Highlands, final destination: Landmannalaugar.  We passed the town of Hveragerði where we learned about the intense geothermal activity in the area; so much so that natives can actually bake bread in the ground!  This however, left the locals with an interesting predicament when it came to burying their loved ones.  They couldn’t bury anyone in the ground for fear of cooking the bodies, so they built their church on a small hill nearby where they would have a proper cemetery.

One of our first stops of the day was at Gjain, my new happy place.  Seriously, this place was like something out of a fairy tale!  The only thing that was missing was Tinker Bell.  Delicate streams and tiny waterfalls, beautiful rock formations and faintly colored yellow flowers made this place nothing but magical.  I could have easily spent the entire day wandering around and enjoying a relaxing picnic nearby.  This is where I took today’s photo of the day.

We quickly entered barren terrain that resembled something of that from Mars.  In fact, this area of the Highlands was where astronauts use to train before going to the moon.  It was surreal to be essentially in a desert like environment with nothing to fear except nature’s unpredictable elements.  The endless, lonely f-roads (term for the Icelandic mountain roads) we traveled on were bumpy and 4WD only, but it felt like a smooth ride in our massive tank.

Once we arrived at Landmannalaugar, I couldn’t believe the amount of people that were there.  Where did they all come from!  Mom said it was reminiscent of Base Camp at Mount Everest.  The landscape reminded me of something more from the Tongariro Crossing in New Zealand.  This hub that backpackers from all over found their ways to was full of smoking mountain sides and lava fields that gave me the serious brain bubbles.  It’s out here where you can really appreciate the fact that Iceland is the land of no native trees.

The weather was unusually beautiful, so we took a detour up to Mount Hekla, one of the most active volcanoes in the country.  The visibility was unreal and made us really feel like we were on top of the world: 1,000 meters (3,280 feet) up and above the clouds.  Lonely Planet paints quite the picture when they describe this volcano and nearby Katla “like wicked stepsisters from some Icelandic fairy tale.”  They also share that “during Middle Ages, Hekla was commonly believed to be the gateway to hell.”  Hekla hasn’t erupted since 2000 and according to scientists, it is long overdue.  In theory, it could go off without any warning, but locals know how closely the volcanic activity is monitored and that a serious earthquake is a good indication of what is to come.  Most recently, the 2010 eruption of nearby Eyjafjallajökull was so violent that it stopped air traffic to and from Europe, so these hellacious peaks are nothing to mess with.  Nevertheless, we enjoyed the rough 4WD road to reach the summit and seized the opportunity to enjoy the clear skies and vast views alongside the beast.

Among the many fun facts I learned that day from our local guide, here are a few of my favorites.  I asked Gylfi if Iceland has any natural predators.  While they do not, I was very intrigued to hear him follow up with saying that it’s not uncommon for a glacier to break off of Greenland and make its way to Iceland.  With a polar bear on it.  He told us that polar bears are not a creature you would ever want to encounter because once they reach the mainland, they can apparently be very hangry (angry while hungry) and ravage everything in sight.  Also, did you know that Icelanders don’t have last names?  The direct translation to their given second names is “son or daughter of [insert father’s name here].”

After a full day exploring the raw beauty of the Highlands, dinner at Saegreifinn was exactly what Mom and I were after.  This super casual seafood joint in Old Harbour was everything I ever wanted from a Scandanavian fish house with nothing but fish kebobs and lobster soup on the menu.  My first mouthwatering taste of the local catch was the perfect end to an epic day. 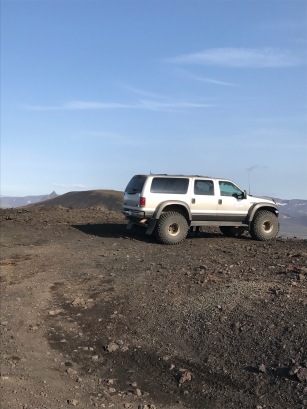 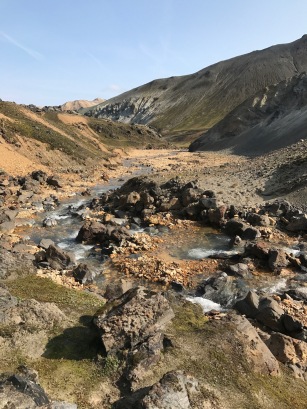 1 thought on “I Don’t Speak Icelandic”