Thanks to a very windy winter, I had the pleasure of suffering intense hay fever more than once. Because of the allergens here, I’m not entirely surprised that after 7 consistent years, Melbourne is no longer the “most livable city in the world.” Looks like I’ll be seeing you pretty soon, Vienna!

Igloo Party
Sunday, August 5
Melbournians are always up for a good gimmick, and this winter we kept warm in igloos. Ironically enough, we booked the hottest day of the month. Instead of bundling up with blankets, we wove them through the piping structure to build a shanty tent to block the sun since the bartender laughed at Anna when she asked for sunscreen in the dead of winter.

Sushi Train
Thursday, August 9
$20 all you can eat sushi sounded like a good way to check out an upscale restaurant I had been eyeing off. Unfortunately, the better part of the CBD felt the same way. With the plethora of food options in Melbourne, I vow to never be that “foodie” extensively queuing for a meal. My friend Brendan and I forwent the crowds for a sushi train nearby. The thought of raw fish sitting on a merry-go-round for who knows how long never really appealed to me, but I actually really enjoyed the futuristic style dining experience. The waitress sat us with an iPad to order drinks and other food not currently on display. When Brendan’s miso soup arrived, it robotically shot down the bar and stopped directly in front of his seat. Since we helped ourselves to whatever looked good, I was curious how to keep track of our tab, but the color of each plate correlated to a price. At the end of our meal, the waitress counted our towering side dishes and billed us accordingly, including the white saucers we accumulated for the price of our beers.

Grab Bag Night
Friday, August 10
Tonight’s grab bag date took me and Anthony on a crawl around the neighborhood. We started at Bar SK, a small funky dive bar that serves rotating craft beers. Two brewers from the Mornington Peninsula stood behind the bar and poured us their featured beer. After chatting with them, we added Jetty Road Brewery to our list next time we’re in the area. Down the road we located Bad Frankie, a cozy nautical themed bar that specializes in cocktails and creative jaffles. I’m convinced that jaffles are Australia’s take on the American grilled cheese, but with more exciting fillings like meats and odd vegetables. A beer tasting room, one pub, a rooftop lounge and two cocktail bars later, we eventually found our way home. Have I ever mentioned how spoiled for choice we are here in Melbourne?

Rushall Community Garden
Sunday, August 12
The “war on waste” has become an increasing discussion throughout Australia. Even though canvas grocery bags have been part of my routine for years, the state of Victoria recently banned all single use plastic bags. There are so many simple ways to reduce our impact on the Earth, so I was very happy to find a communal compost bin in our new neighborhood. Those who are active with the Rushall Community Garden are very well organizing in marking which of the dozen compost bins are resting and which ones are currently accepting food scrap donations.

Music Bingo
Tuesday, August 21
Local music venue, The Corner Hotel transformed our Tuesday night into a musical mystery tour. We collectively reminisced over top 100 hits for the past two decades matching song title and artists to those randomly scattered across our bingo playing cards. Bree won a miniature guitar and Anna collected her victory maracas in time for our impromptu band to jam along with Fatboy Slim’s “Rockafeller Skank.” 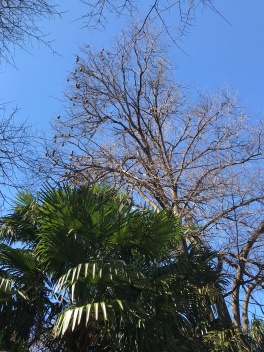 See the bats up there?

New Prime Minister
Friday, August 24
I barely understand American politics, let alone the foreign concepts of the Australian government. Elections here work completely different. They are mandatory for all Australian citizens, yet do not follow a set election day like in The States. You can understand my confusion to hear that Australia got a new prime minister when there were no nationwide elections. From my understanding and in less politically correct words, a member of the elected prime minister’s party decided one day that he could do the job better than the current official. This lead to politicians voting out Malcolm Turnbull for Scott Morrison. However the system works, I don’t get the impression that Australia is thrilled with their now 7th prime minister in the past 11 years.

Bendigo on the Hop
Saturday, August 25
Anthony and I traveled about 2 hours north of Melbourne to attend a one of a kind beer festival. Bendigo on the Hop took a fun twist on a traditional beer festival, spreading it across town. We got to visit 10 venues within walking distance that featured two different brewers with our choice of samples. I loved the concept of a DIY bar crawl meets beer fest. Not only did it introduce us to the charming town of Bendigo, but we also lucked out with a beautifully sunny day in the middle of winter.